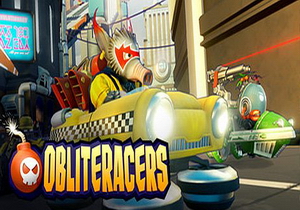 First announced early last year, Obliteracers has come a long way. For starters, it’s called Obliteracers now instead of Space Dust Racers. Secondly, it’s finally releasing on Steam next week, February 24 to be precise. While the footage below might put you in mind of Mario Kart, Obliteracers is more like ye olde whimsical car combat game Micro Machines.

One of the coolest features is the ability to cram 16 local players on one screen thanks to some neat peripheral support. In addition to gamepads and keyboard, users can pair other laptops, smartphones and tablets with the game as well, meaning there should never be a shortage of inputs (assuming you don’t have a mate Steve who still refuses to buy a smartphone because he’s on the run from the authorities).

I played a little bit at PAX Australia last year and had a good time. While it’s obviously geared towards local multiplayer, there are bots to demolish as well. Here’s the launch trailer to sate your urges for lighthearted alien carnage.