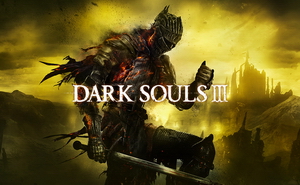 Dark Souls 3 is about cinder. The Lords of Cinder, to be precise, some of whom have risen from their thrones and decided to go on a bit of a rampage in a world best described as ‘apocalyptic’. You, the player character, are also a Lord of Cinder, or at least capable of using their powers, and your mission is to kill the other lords because, um, you have to. Yes.

If I sound confused, then blame a rather unfortunate translation mix-up at the Dark Souls 3 preview event in Hamburg, where no less a force than Hidetaka Miyazaki himself took to the stage to explain some of DS3’s core concepts and ended up having them translated into statements that made very little real sense. Like this one:

«So this is basically, where, you know, knights and wyverns used to live, and now they’re facing the doomsday.»

Quite. Still the three or so hours I played of the game did give me a chance to learn more about its systems, its maps, and its status as the ‘real’ or ‘proper’ sequel to one of the best games ever made. It also gave me cause for both concern and excitement.

Miyazaki’s latest has been touted as Bloodborne meets Dark Souls, and while this is true when it comes to certain mechanics – your character is more mobile than before, and combat seems quicker, more accessible – it’s also easily applied to the world itself, or at least the new part of the world that I saw in this latest build. The Undead Settlement, to quote a journalist sitting next to me, felt like Hemwick Charnel Lane with the brightness turned up.

Which is both fair and totally understandable, given that it is the work of a man and a team with a distinct style, in the same way there are certain expectations of a Scorsese film or an Easton Ellis novel. But it also points to the problem that Miyazaki, like any famous author, now faces: it’s impossible for the now-president of From to avoid comparisons to what went before, negative or not. Bloodborne got away with it because while it had familiar mechanics its setting was (comparatively) more modern, its style so obviously different. Dark Souls 3, by virtue of it being a second sequel with influences from another highly-popular game, so far feels like a greatest hits, a best-of. A bit…safe.

That’s certainly what the Undead Settlement felt like, with its mobs of vicious pitchfork-wielding enemies and claustrophobic, tightly-packed huts and other buildings to negotiate. In fact, it felt even more obviously-inspired by Resident Evil 4 than sections of Bloodborne did, featuring exploding barrels, a possessed townsfolk, and a rural setting. The action was sharp and intense, with frustration minimised by your new abilities and an abundance of bonfires. On the other hand, tension was also increased thanks to what seemed like far more foes on hand. But, so far at least, Dark Souls 3 has little of the joy of discovery which defined Demon’s Souls, Dark Souls, and Bloodborne. Even the way you arrive at the Settlement feels overly familiar: carried there by winged beasts.

All this doesn’t mean Dark Souls 3 is bad. In a lot of ways it is very, very good. The Bloodborne influence makes the early going far easier than before, and while using your shield as much as your sword is still encouraged, there’s a little more scope for just wading in and killing things. (That said, it’s probably best to note here that Bandai told us that the build’s difficulty had been dialed back a notch, so expect it to be more difficult in the retail release.)

Enemy design is also good, particularly the Settlement’s smaller, knee-high beasts which die easy enough one-on-one but can shred anyone when there are two or more present, a testament to not judging anything on its appearance. Like the best Souls games, there’s a hint of anthropology to be had with your adversaries, a need to watch them before you waste them. So far the creature design does have that quality, a grotesque fascination with the way they move and operate.

Again, however, it also feels familiar. Expected. Giant rats, dangerous caped knights, gigantic beasts wielding massive saws: fighting them is fun, beating them is better, but between the familiarity and (what appears to be) re-used assets there’s a huge sense of deja vu here. It feels like everything we’ve seen so far is caveated like this: there is a good flow to proceedings, a sense of forward momentum, even if so far it is through areas that you probably recognise, if not necessarily from this game. Even the big new additions, such as the weapon arts system, didn’t seem to really make much of a difference, thanks to the tried and true sword/shield combo getting you through most problems.

That said, Souls games aren’t ones for revealing their true worth in a few snatched hours of hands-on. (In fact, I would go so far to say that the Souls games are some of the most difficult to see pre-release, given that your entire mindset, from character creation to exploration, is naturally different than when you play at home.) The genius of Miyazaki’s work is how the whole comes together, the interplay between world-building and exploration, how its lore is used for dreamlike revelations rather than lucid exposition. The issue so far is that we’ve had this dream before. Miyazaki has the problem everyone else has.