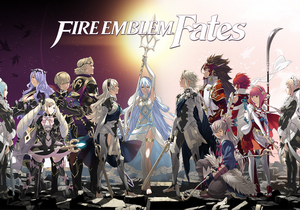 There are two sides to every conflict, and it’s rare that you get to experience both of them. Now, through a strange chimera of Pokemon-style counterpart versions and paid DLC, Fire Emblem Fates offers you the opportunity to fight, love, and try not to perma-die in each of two warring kingdoms. Whichever path you choose, it’s a long journey, so you’d better know what you’re enlisting for.

Fire Emblem Fates: Birthright begins as a familiar story of a young, idealistic warband fighting an evil empire. There will be death and tears, but you’ll always feel like the hero. Missions have simple objectives like defeating all the enemies on the map or taking out their leader, and you can play extra ones for more experience. In Fire Emblem Fates: Conquest, you probably won’t feel like a hero. Choosing to side with the dark empire of Nohr — your grim childhood home — against Hoshido means taking on more varied battles and desperate conditions. You may need to beat a specific number of opponents, or defend a point for a certain number of turns against a superior force, or otherwise alter your usual plan to claim victory.

Whichever version you choose, you’ll have a war to fight, and Fates makes several welcome changes to Fire Emblem’s quarter-century of turn-based, grid-navigating battles. Weapon durability is finally gone, so you won’t feel paradoxically obligated to keep your best gear stowed in the convoy for fear of wearing it out. More weapon types are now part of the rock-paper-scissors vulnerability system, meaning you’ll be better rewarded for thinking about who to leave standing where and holding what once the enemy’s turn begins. That’s particularly true with the revised support system.

Like in Fire Emblem: Awakening, one unit can help out another by ducking into their protection, or simply by standing next to them. Unlike Awakening, characters being protected will only ever block attacks that target their protector, and characters standing next to each other will only ever help make attacks. Rather than pairing up characters by default and hoping they perform both tasks based on percentage chances, you now know precisely what will happen in a skirmish (assuming nobody misses or gets a critical hit) based on where the belligerents are placed. It’s yet another wrinkle to keep in mind when positioning your characters, but swapping out dice rolls in favor of simple, constant rules makes you feel much more in control. Once I got the hang of the new system, my spirit-summoning soothsayer and bow-wielding prince duo became unstoppable, making pincushions of wyvern cavalry and tearing down armored knights like paper dolls.

Aside from sharing a brief introduction (which you can skip on subsequent playthroughs) and the same cast of characters (which appear in totally different contexts), both Birthright and Conquest are unique, full adventures — expect to spend at least 30 hours in each. You can download the other campaign as paid DLC, and you can grab a third one, Revelation, starting on March 10. Or just get all three of them in one cartridge with the Special Edition.