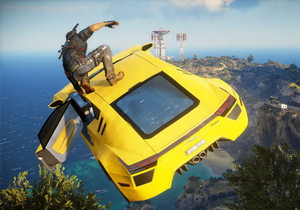 For a game so magnificently large, Just Cause 3 also feels disappointingly limited. There are jets to fly, mountains to scale, parachutes to be pulled at the last second, mountain highway tunnels to be soared through. There are machine guns to be fired while hanging upside down underneath a helicopter, nuclear bombardments to avoid in your prop plane, and air-punching escapes from certain death. It should be the most exciting game ever made; sometimes, it really is exhilarating. But after the appeal of fight and flight in all its many forms wanes, Just Cause 3’s fundamentals are exposed as being merely average at best and actively bad at worst: from controls to enemy AI to shooting, each is undercooked, making the whole thing feel more like busywork than it ever should.

As in its predecessors players step into the boots of Rico Rodriguez, who for some reason now looks like Nathan Drake’s Latin American cousin rather than an Antonio Banderas-alike, presumably to Appeal to a Wider Audience. Either way, Rodriguez is an absolute charisma vacuum, saying little and offering even less, and the story he features in is entirely forgettable: there’s the dictator ruling the islands of Medici with an iron fist, a comedy sidekick, a virtuous scientist, and a morally grey American agent who is essentially either of the characters played by Joe Don Baker in Edge of Darkness or GoldenEye.

None of it matters, of course: Avalanche may as well have just put cardboard cut-outs in there, as they function merely as uninteresting stereotypes, exposition ciphers. Thankfully, then, you’re free (after a short while) to just fuck the whole thing off and get on with the business of arriving in various towns and smashing the place to absolute bits, Pale Rider directed by Robert Rodriguez.

Which is to be commended, and Just Cause 3 does keep upping the ante, providing you with more and bigger things to reduce to rubble. Your grappling hook can also fire out two sets of tethers from the off, each of which has remotely-controlled tension – meaning you can attach an offending statue of The Big Bad Dictator to the floor behind it and wrench it clear of it’s moorings. The tethers – along with the physics-based nature of your environment – means you’ll spend a lot of time attaching things to other things and seeing what gives first. Personal favourites include tethering two attack helicopters together and watching them fight to stay airborne, or attaching lowly soldiers to passing aircraft and seeing them wrenched screaming into the sky. The potential for YouTube highlight reels, as with Just Cause 2 (which, in a novel touch for the time, built YT uploading functionality into the PS3 version) is immense.

The gameloop itself is simple, in a bid (perhaps) to facilitate user-end nonsense: fly/drive/glide to a location, blow up the various command and control structures to drive the local forces out, rinse and repeat. Each settlement, fortress, and village under enemy control operates in much the same way, and it’s up to you to combine your myriad abilities to take out antennas, fuel pipelines, and other ‘chaos’ items. Freeing these settlements then unlocks challenges, where the player can test their mettle in various activities, earning points towards skill tree upgrades as they do: a clever little system which means players will want to see each town, if only to make Rico more powerful.

For a while, it is fun. While not the greatest-looking game in the world (the lighting is nice, if a little flat, and there’s the vague sense that you’re actually fighting through a giant Hollywood set, rather than an actual lived-in place) the explosions – and the effects which accompany them – are marvelous. Massive, dangerous, loud and unpredictable, they feel like a fitting reward for your devious tethering schemes. Yanking large flammable infrastructure slowly clear of its foundations carries a little thrill, as players wait to see if they can actually can pull it off. They often can, and the result is a carnage on a scale rarely seen. A personal favourite is clambering underneath a gigantic satellite dish, putting remote explosives on its structural weak points, deploying the wingsuit and remote detonating the whole thing while I fly away with the camera looking behind me.

Sadly, the rest of the game can never hit these heights, whether in terms of quality or inspiration. Story missions are often bland and forgettable, fetch quests or escort missions for characters you don’t care about, and a good bunch of the towns you liberate feel so indistinct in both design and visuals that often you’ll arrive places and catch yourself asking if you’d already saved it. There are highlights, of course, such as the various heavily-defended centcom bases, including a particularly inspired one up in the mountains. But for the most part it’s base after base, town after town. The world is big, but it feels empty, and in the early hours is bizarrely conservative: weapon ammo is limited, and the game is always encouraging nonsense while keeping the toys and skills that truly enable it locked behind upgrades.

Your mileage may vary of course, and Just Cause 3 does have the best explosions in the business, which means it’s easy to forgive some of its problems every time something big goes boom. But the rest of the game is surprisingly rote, a checklist which feels flat, not particularly freeform. You’re encouraged to use skill and imagination to create marvels of destruction, but this isn’t always possible: shooting is weak-feeling and aiming is loose, and AI enemies are brainless fodder.

Worse, the whole enterprise feels unnecessarily fiddly and unintuitive: you have to open your map to find out where certain chaos destructibles are, breaking the flow, and the game switches controls between land and air tethering which means you’re oftentimes more likely to fail in your bid for GIF stardom than succeed: there’s just enough difference in what you do on land and what you do in the air for it to require at least a little bit of thought, rather than becoming muscle memory. (A squirrely camera doesn’t help here either, often getting confused when you tether into close quarters, like the underside of a platform.) The technical issues don’t end there, especially on Xbox One, which suffers from crippling frame rate dips and gargantuan load times. I played it on PC, and while the former issue isn’t as prevalent, the latter remains: not to the same extent, but it’s still noticeable. Worse were the infrequent crashes and hangs, which I encountered three times while playing.

There’s a lot to do in Just Cause 3, it’s just that doing it all isn’t really that much fun. In fact it’s probably a better game in retrospect than it is when you’re playing it: freed from the controls and other issues, you’ll remember it fondly. You’ll also likely want to get back to it: there’s a moreish, Ubisoft-style vibe here that encourages repeated playing. Those of you that wanted Just Cause 2 Part 2 will love what’s on offer, but it all feels lesser than the sum of its parts.